Home Resources Searching For The Truth: Examining 5 Myths About Obesity

Searching For The Truth: Examining 5 Myths About Obesity

There are obstacles scattered along the path of everybody’s weight journey. It could be self doubt. It could be a lack of access to resources and support. It could be the stigmatization and weight bias that is pervasive in society.

No matter the reason, these barriers are often borne out of a lack of knowledge or understanding around obesity itself. Obesity is a complex disease, and a lack of proper information can lead to the formation of some potentially harmful myths and misconceptions – even among people living with obesity themselves.

Myth #1: Having breakfast (as opposed to skipping) is protective against obesity.

Obesity is a complex, multifactorial condition. What can help manage weight is combining a well-rounded diet with exercise and other healthy lifestyle choices. 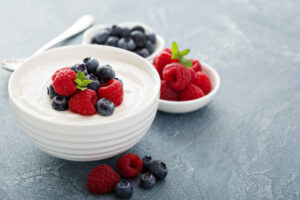 Choosing a healthy breakfast full of whole foods that are rich in essential nutrients is a great way to start the day with an energy boost, ensure you get the recommended amount of vitamins and minerals and help your brain function better.

Foods such as Greek yogurt or other fermented milks, whole wheat toast, chia seeds, berries, eggs, leafy greens and even fish can all be parts of a nutritious, satiating, delicious and well-balanced breakfast.

There is no doubting the benefits of a diet filled with fruits and vegetables. They are an essential part of a balanced eating pattern and are packed with vital nutrients, minerals, and fibre that the body needs to function properly.

Canada’s Food Guide recommends eating a variety of fruits and veggies to potentially lower the risk of heart disease and suggests filling half your plate with fruit and vegetables.

There are also studies showing that increased fruit and non-starchy vegetable consumption is inversely associated with weight change.

One study that specifically examined people living with obesity found that fruit consumption was associated with weight loss among a group of dieters.

But while these studies did have some interesting findings about how fruits and vegetables can help aid in weight management, the increased consumption was only part of the puzzle for those patients.

As Dr. Sandy Van, an Obesity Physician based out of Toronto explains, diet is just one aspect of dealing with obesity. “We’re talking about a chronic disease. It is hard to manage just based on diet and exercise alone,” says Dr. Van, “It requires real treatment. That might mean diet and exercise, but there’s psychological support and cognitive behavioural therapy which helps you change your relationship with food.”

Eating more fruits and vegetables is great, but obesity is a complex disease that often requires more than just some added greens and berries in your diet.

Myth #3: Since obesity is influenced by genetics, it cannot be prevented

It’s true, obesity can be influenced by genetics as many people are predisposed to the disease as a sort of leftover effect from the days when food was far scarcer for humans than it is today.

As Dr. Van explains here, the human body was designed to operate in hunter-gatherer mode by conserving body weight because our ancestors didn’t always know when their next meal was going to be. Fast forward to 2022, and much of the world has food readily available.

It is no wonder, then, that so many people struggle to lose weight when our bodies are actively trying to conserve it.

However, that doesn’t mean that obesity can’t be prevented. Maintaining a healthy lifestyle plays a big role in trying to offset some of the risks associated with obesity and there are also environmental, societal, and psychological aspects of the disease.

Obesity is a complex chronic disease and cannot simply be boiled down to “it’s influenced by genetics therefore it can’t be prevented.”

According to Dr. Van, even modest weight loss of five-to-ten per cent can “significantly improve your risk reduction of developing the problems that we’re worried about such as diabetes, heart disease or cholesterol problems.”

Myth #4: It is good to lose weight slowly as opposed to rapidly

This myth has certainly been controversial as credible evidence exists to support both sides of the issue.

The study determined that how much weight you lose is more important than if you lose it quickly or slowly when it comes to overall health improvements.

The findings from that study were backed up by another from 2017 that found similar benefits from both fast and slow weight loss, with a few interesting differences. Both fast and slow weight loss led to reduction in waist circumference, hip circumference, total body water, body fat mass, lean body mass, and resting metabolic rate (RMR) among the patients.

One systematic review done at Cambridge University Press found “no significant difference in waist and hip circumferences, waist:hip ratio and fat-free mass between gradual and rapid [weight loss].” But the same review found beneficial effects of gradual weight loss as compared with rapid weight loss on fat mass, body fat percentage and RMR in people who were overweight or lived with obesity.

The bottomline is that changing behaviour to promote a healthy diet requires a long-term plan to properly establish patterns that stick.

So, while it may be a myth that losing weight slowly vs quickly is better, it seems losing weight quickly isn’t necessarily better either. What matters for long-term health and sustained weight loss is establishing healthy habits and changing behaviour – which can take a long time.

Myth #5: There are no benefits of exercise if it does not help me to lose weight

While it is true that exercise alone won’t necessarily help you to lose weight or prevent obesity, that is more to do with the complexities of the disease and less about the potential benefits of exercise. 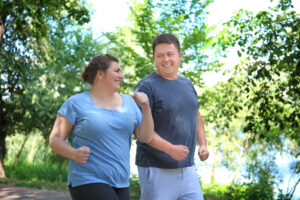 As discussed above, exercise is simply one part of our health journey, and there are plenty of benefits to keeping up with your workouts even if the scale isn’t budging. In addition, through regular physical activity, your body composition can improve, meaning you could be losing fat while gaining lean mass, which can also explain why you don’t see a difference on the scale.

Studies show that regular exercise can help lower risk of cognitive impairment from Alzheimer’s and dementia, and reduce the risk of Type 2 diabetes, cardiovascular disease, cancer, hypertension, depression and osteoporosis.

There are simply innumerable benefits of exercise even though there is evidence that exercise alone won’t necessarily help you lose weight.

I think we can consider that myth debunked.

Attend upcoming events in our community.