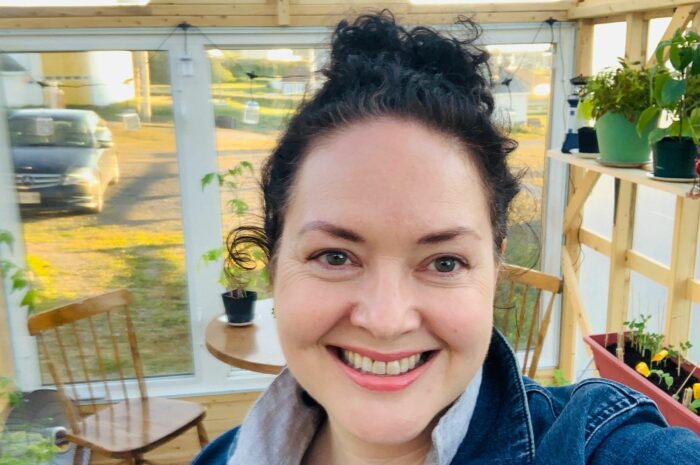 Rachel Atkins is the director of strategy at Obesity Matters , where she works to leverage her own experiences — in business and body image – to transform communities, institutions and society to better the lives of Canadians living in larger bodies. She is an advocate for those have been on a similar journey, and her hope is that more can follow the path of positivity and self-love. This is her story.

I struggled with weight since I was a kid in the late ‘70s and early ‘80s. I dealt with lots of bullying from a very young age because of my size. When I look back at pictures from that time, I can see that I was chubbier than the other kids — that I was overweight.

Leading up to my teens, I was still struggling with that. In fact, I can barely look at the pictures from my high school graduation, which my mom has prominently displayed in her living room. I was wearing this beautiful gold dress that someone locally had made for me. I’m from a small fishing village in northern Newfoundland, and it was very normal to wear big dresses for weddings, graduations and big events, and very normal that you’d have someone make it for you. So I remember being so proud of this dress, I really wanted to wear gold, but when I look back, I think, ‘Wow, everything about that dress really accentuated my weight.’ I can’t even believe that was me.

Today, I’m 47, and I would say up until my early 30s, I took on the persona of someone that struggled with their weight. I’ve done every possible diet, I was certainly a yo-yo dieter, and I believed it was healthy. I went to the gym at five o’clock in the morning every morning for a year. And over the course of that year, I was very careful about what I ate, going to the gym and working out religiously. I lost 90 pounds, which was the lowest I’d ever weighed in my adult life.

But I still felt really fat. I would go out partying in my twenties with my skinny friends and I felt like, ‘Oh boy, I’m the fat one, I’m not the good looking one.’ Soon, I was travelling a lot for work and and eating out a lot, which was one of the reasons that the weight gradually began to come back. And then I found myself going through many different diets, including Jenny Craig and Weight Watchers. I remember being at work and my colleagues seemed so much more relaxed about food and I didn’t get it. Because when I would start my day, I would think, ‘Okay, how do I make sure that I am eating the right kinds of food at the right time and how do I fit in my snacks and and what am I going to have for lunch and then as soon as lunch is over, what am I having for dinner tonight?’ Food ruled my entire life.

In my 30s, I also had a personal trainer who I just loved. I was very fortunate to be able to pay her to come to my condo two or three times a week. So physically, I was very very fit and very strong. I remember her saying to me once, ‘You have the build of a very strong person, you can lift way more weight than most of my other clients, but you’re not going to be a very svelte runner, that’s not what you’re built for.’ I felt that was true and I felt really good about that. At the same time, I never aspired to be skinny, but played into this idea that your worth is tied to a number on a scale, and that there were a lot of things that I wasn’t worthy of because I was overweight. Like at work, which was a very professional environment. I dressed well, my hair looked good, I had the makeup, but I was almost always the bigger person in the room, and so I felt that I had to be more of a raging extrovert to make up for the fact that I didn’t look like everybody else.

The job itself was very stressful and demanding, I was doing a lot of global work and traveling to all these wonderful cities around the world and getting to eat at very high-end restaurants. And as soon as I sat down on the plane, I thought to myself, ‘I’ve worked hard, I’m stressed, I deserve to eat those warm nuts that they’re going to serve, and the four-course meal that they’re going to provide along with the cheese and the dessert.’ There was no way in heck that I was going to be able to say no to any of it. If you’re sitting in a nice restaurant, so much of it is the visual cues — you’re going to want to have that glass of wine and you’re going to want to have that appetizer and then if everyone else at the table is having a nice dessert, you’re not going to be the one that says ‘no, thank you.’

At that time, I found out that my weight was accelerating, more than it ever had in my life, and that tying my worth to a number on scale played out in many other aspects of my life, including work, relationships, and family. Food was essentially driving my life. And it was telling me, ‘You’re not worth as much because for some reason you can’t figure this out, you’ve got a great career, you’re smart, but you just don’t have the willpower, Rachel.’

My last resort was to see a doctor in Toronto who was running a weight management clinic. It was expensive, but I was desperate, and I was ready to try anything. Part of his program involved training your mind to think in a different way, and he was able to explain to me the physiology of my body in a way that made sense, and what was going on with respect to how I took in food versus my smaller ‘normal’-looking friend who could eat more than me, for example.

As I went along in the program, I would come in and I’d say, ‘Oh gosh, I feel like I don’t understand if I’m doing this right because I’m doing all the right things but that number on the scale is actually still going up.’ And my doctor would say, ‘Well Rachel, how’s your diabetes?’ And I’d say, ‘I don’t have diabetes,’ and he’d say, ‘Well, how’s your high blood pressure?’ And I’d say, ‘I don’t have high blood pressure,’ and he’d say, ‘Do you feel healthy?’ I said yes, and he told me that was the most important thing. Then we discussed cognitive behavioural therapy and how to manage a craving, how to deal with those environmental cues and set myself up before I get on that plane or go in that fancy restaurant — it was a very different approach. I learned so much and I realized there are so many people out there, like myself, who have no idea about any of the science behind what’s going on with their bodies.

That’s how I started working with the organization Obesity Canada , through which I met some wonderful doctors and patients that were really making a difference. I decided I wanted to help spread the word that it’s not about eating less and moving more, but that you should start by being kind to yourself, accepting yourself and loving yourself just as you are, and thinking about your health in the future and making sure that you’re doing as much as you can now to have that future.

Through Obesity Matters , which is made up of a lot of people from Obesity Canada, we’re trying to be the voice of the people who are living in a larger body. Today, I’m comfortable being the size I am. My daily mental real estate of thinking about weight loss has gone from 50 per cent to 15 per cent, so it is still something I want to work on and a journey I’m still on. The message I hope to get across — and that I’ve learned through this period — is that no matter what your size and your shape and your abilities, you are a person. You are worthy of love and of kindness, and that is what your primary focus should always be, and the rest will follow.

This article was originally published in Healthing.ca